'Sharing our Stories' is a series of eight educational books and films, published by Pearson, Australia, where indigenous Australian elders and children tell us about who they are, sharing and illustrating their own dreamtime stories. Author and film-maker, Liz Thompson has created this series, in collaboration with indigenous communities. The communities involved were also part of a digital storytelling project which facilitates creative self representational for young people.

Each story is told by traditional storytellers and beautiful illustrations produced by children from each community.

A selection of four films can be watched below... 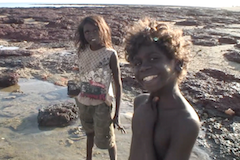 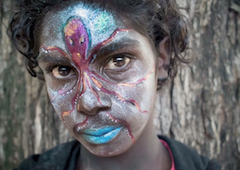 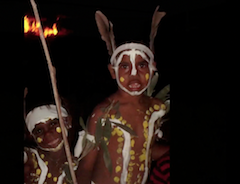 The story of the Karajarri people. Storyteller Wittadong Mulardy, with her son Mervin, Mullet Mulardy tells part of the stories through song cycles. Mullet speaks of a massacre and tells of the song that came out of the bones and travels across the country, it came to his grandfather's dream...

Yulu's coal is a story shared by the Adnyamathanha people of the Flinders Ranges. Yulu's Coal tells the story of Yulu, the Kingfisher man who travelled to Wilpena Pound to conduct an initiation ceremony, the sacred fires he lit as he travelled left behind the coal deposits today being mined by Leigh Creek Coal Mine. Storyteller - Noel Wilton.

Shake-A-Leg - Lockhart River is one of eight film clips accompanying the second series of Sharing Our Stories books and audio CD. "Its about time we the indigenous people share our stories with Europeans as well. They say Australia is a multicultural nation in the world, well bring it on Australia, lets do it." Storyteller - Umpila elder, Patrick Butcher.